Rhino are unique in that unlike other horned animals, their horn has no boney core and is comprised primarily of keratin which is very similar to your own hair or nails. Just like your hair and nails, rhino horn grows back after trimming at a rate of around 10cm per year. This equates to around 1.5kg of new horn from a male, and 0.75kg from a female every year.  Rhinos on BDR are routinely trimmed, primarily to render them less attractive to poaching syndicates.  BDR would ideally only like to trim every 2.5 years, but with the insidious poaching crisis underway, it is currently done every 1.8 years per rhino.

With their new security system in place BDR hope to be able to extend this trimming interval to as long as 3.5, or even 4 years per rhino.

This trimming process is regulated by the National Environmental Management: Biodiversity Act (NEMBA) (Act No. 10 of 2004) and the Threatened or Protected Species (TOPS) Regulations, 2007.

For a rhino horn to be trimmed, a permit must first be acquired from the Department of Nature Conservation. The trimming process then  takes less than 20 minutes per rhino and is conducted under light sedation and under the supervision of a qualified and experienced Wildlife Veterinarian. The horn is trimmed using an electric saw about 8cm above the growth plate where there is no bone, nerves or blood vessels. It is an entirely painless process as well as non-permanent. In other words, the horn grows back and therefore needs to be routinely trimmed as a poaching deterrent.  The whole process is witnessed by government officials, and the horns are immediately removed by professional security firms into safe-custody vaults off the property.

Platinum Rhino has been doing this for the past 10 years and currently has around 6.5 tonnes of stockpiled rhino horn stored in safe custody in vaults around South Africa. 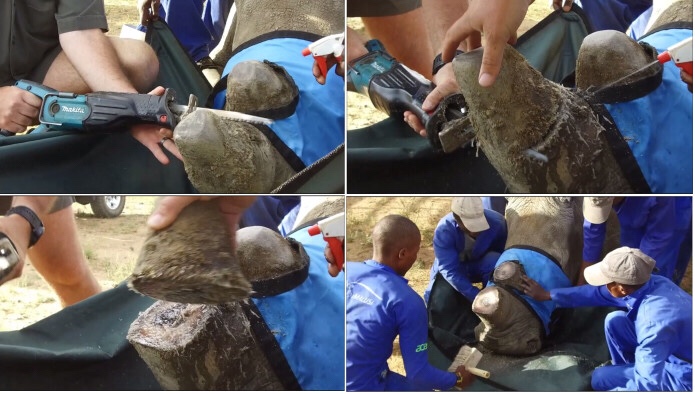