Poaching as it relates to Trade

Just like diamonds, rhino horn is revered by many people all over the world as a status symbol, often in the form of knife handles, libation cups, jewelry (beads and bangles)  and more. It is also an ancient cultural belief, held for thousands of years in the Far East, that rhino horn cures illnesses.  As a result there is a healthy international demand for rhino horn, which simply cannot be denied. Despite education campaigns, demand is not being reduced, and the poaching has not abated, fast enough.

Unfortunately, CITES, an organisation initially intended to support the fundamental tenets of ‘Conservation’ and ‘Sustainable Use’ and ‘Trade in Endangered Species’ (the TES in the acronym CITES), has been infiltrated and totally corrupted by animal rights NGO’s who believe no animal should die or be used by humans – not even for food! Despite the fact that rhinos do not have to die in order to harvest their horn, CITES, as a result of pressure from these animal rightists, have successfully banned trade in rhino horn internationally for the past 43 years .

Rhino horn trade in South Africa remained legal throughout this ban period, but things started to change in 2007.  In that year there were  a mere 13 rhino deaths to poaching in South Africa.  With regulation tightening up, and rumours of the impending Moratorium on Domestic Trade in Rhino horn, starting in 2007 and finally being implemented in 2009, the scourge of poaching in South Africa sky rocketed to over 1000 rhinos poached per year in 2013 right through to 2017. See below a graphic, originally from WWF and annotated with some key dates, and you make up your own mind if Trade Bans and Poaching are linked in any way. 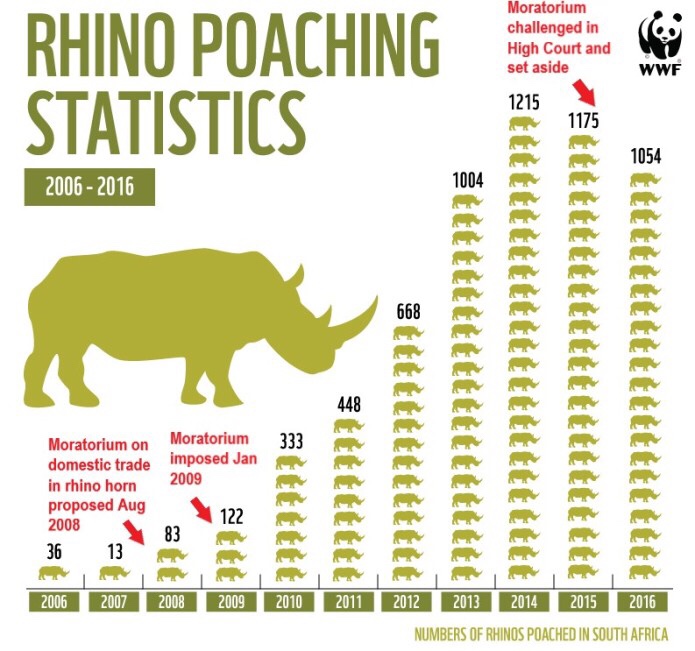 Now, it is a simple fact that no ‘conservation project’ can continue to survive without a sustainable income from somewhere.  The logical source of this income for a rhino conservation project would be from trade in sustainably harvested horn, off live rhinos. John thus felt it was really important to establish his constitutional right to sell his legally and humanely harvested horn in order to fund the continuation of his BDR Project and ensure the long term survival of rhinos.  After winning his initial case in the High Court of South Africa to dismiss the Moratorium on Domestic Trade in Rhino Horn, as well as winning the 3 subsequent appeals by the Department of Environmental Affairs (DEA) against the High Court finding, (which went all the way up to the highest court in our land, the Constitutional Court of South Africa) it remains a sad fact that the DEA continues to hamper permitting processes in South Africa to such an extent that a year later it has been near impossible to trade rhino horn.

All of this ongoing anti-trade activity, from animal rightists, CITES and the South African Government, has sadly had the dire effect of swinging a perfectly healthy LEGAL trade, which should rightly benefit the people and economies of Southern Africa, to an entirely unhealthy and insidious ILLEGAL trade environment. The unfortunate side effects of these totally irresponsible decisions by CITES and the poor performance of the South African DEA include: