The Orphanage was established to care for any rhino calves found in distress or at risk of dying. Rhino cows and calves are monitored closely and management is alerted as soon as any problems arise.

The orphanage currently cares for 51 rhinos. 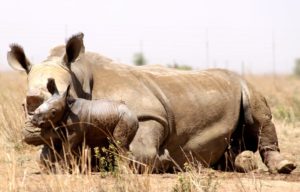 The decision to remove a calf for hand-rearing is never taken lightly. We prefer that dams (mothers) raise their own calves, feeding them their own mothers milk. Calves can however be removed for any of the following reasons, to give them a fighting chance of survival:

The Orphanage facility consists of a building that has a kitchen for preparation of milk, temperature controlled rooms where very young and sick calves are cared for and medical care can be administered, some store rooms, 6 smaller rhino camps, and 5 larger rhino camps. 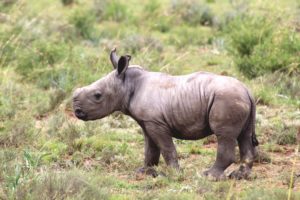 All calves are started on teated 2l cool-drink bottles to teach them to suckle well.   From there they progress to the special bucket-bottles seen in the picture below. The youngest calves are fed every two hours around the clock, and from two weeks this can be changed to every 3 hours.

As they grow older, night feeds are reduced and duration between feeds is extended.  Calves are weaned off both milk and human contact from 16 to 18 months, but remain in the Orphanage until they are about 3.5 to 4 years old and have enough confidence to be re-integrated back into one of the breeding camps. 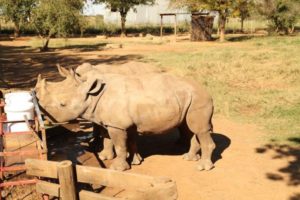 Feeding Time at the Orphanage

An important principle practiced at the Orphanage is to ensure that these orphaned rhinos do not see humans as companions. They are always kept with other rhinos of a similar age, or with surrogate sheep. They always remain wild animals with the intention of successful integration back into the larger camps as soon as is feasible. 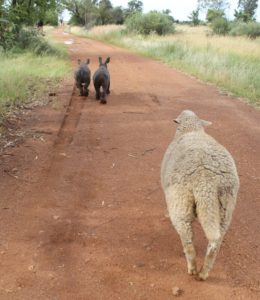